The separation of ownership from management, characteristic of the modern firm, gives discretion to the managers to pursue goals which maximise their own utility and deviate from profit maximisation, which is the desirable goal of owners. Given this discretion, Baumol argues that sales maximisation seems the most plausible goal of managers. From his experience as a consultant to large firms Baumol found that managers are preoccupied with maximisation of the sales rather than profits.

Several reasons seem to explain this attitude of the top management. Firstly, there is evidence that salaries and other slack earnings of top managers are correlated more closely with sales than with profits. Secondly, the banks and other financial institutions keep a close eye on the sales of firms and are more willing to finance firms with large and growing sales.

Thirdly, personnel problems are handled more satisfactorily when sales are growing. The employees at all levels can be given higher earnings and better terms of work in general. Declining sales, on the other hand, will make necessary the reduction of salaries and other payments and perhaps the lay-off of some employees. Such measures create dissatisfaction and uncertainty among personnel at all levels. Fourthly, large sales, growing over time, give prestige to the managers, while large profits go into the pockets of shareholders.

If they realize maximum high profits in one period, they might find themselves in trouble in other periods when profits are less than maximum. Sixthly, large, growing sales strengthen the power to adopt competitive tactics, while a low or declining share of the market weakens the competitive position of the firm and its bargaining power vis-a-vis its rivals.

The top managers become to a certain extent risk- avoiders, and this attitude may act as a curb on economic growth. However, the desire for steady performance has a stabilizing effect on economic activity. The application of these projects is spread over time so as to avoid wide swings in the economic performance of the firm. The complexity of the internal organisation of large firms renders decision-making a lengthy process: Prices are set by applying a standard mark-up to costs, advertising expenses are determined by setting aside a fixed percentage of total revenues, inventories are determined as a percentage of sales, and so on.

However, the above reasons do not imply that businessmen are completely indifferent to actions of competitors. In particular, being sales maximisers and growth seekers, they are very alert to any change in their share of the market. During this period the firm attempts to maximise its total sales revenue not physical volume of output subject to a profit constraint.

The firm in these models does not consider what will happen in subsequent periods as a result of the decisions taken in the current period. The minimum profit constraint is exogenously determined by the demands and expectations of the shareholders, the banks and other financial institutions. The firm must realize a minimum level of profits to keep shareholders happy and avoid a fall of the prices of shares on the stock exchange.

That is, Baumol accepts that cost curves are U-shaped and the demand curve of the firm is downward-sloping. The total-cost and total-revenue curves under the above assumptions are shown in figure Total sales revenue is at its maximum level at the highest point of the TR curve, where the price elasticity of demand is unity and the slope of this TR curve the marginal revenue is equal to zero.

Whether this maximum sales revenue will be realized or not depends on the level of the minimum acceptable level of profit which may act as a constraint to the activity of the firm. If the firm were a profit maximiser, it would produce the level of output X nm. Under these circumstances we say that the minimum profit constraint is not operative.

If the profit constraint is operative the price elasticity will be greater than unity. An increase in the fixed costs will affect the equilibrium position of a sales maximiser he will reduce his level of output and increase his price, since the increase in fixed costs shifts the total-profit curve downwards. This is shown in figure This prediction is contrary to the traditional hypothesis of profit maximisation. A profit maximiser will not change his equilibrium position in the short run, since fixed costs do not enter into the determination of the equilibrium of the firm.

So long as the fixed costs do not vary with the level of output and provided that the increase in TFC does not lead the firm to close down altogether the change in the TFC will not lead the profit maximiser to change his price and output in the short run. Baumol claims that firms in the real world do in fact change their output and price whenever their overhead costs increase.

The imposition of a lump-sum tax will have similar effects. If the firm is a profit maximiser the imposition of the lump-sum tax will not affect the price and output in the short run the profit maximiser will bear the whole burden of the lump-tax. If the firm is a sales maximiser, however, the lump-tax will shift the total-profit curve downwards and, given the profit constraint, the firm will be led to cut its level of output and increase its price, thus passing on to the consumer the lump-sum tax.

However, the decrease in output will be larger than the decrease of the output of a profit maximiser. A similar analysis holds for an increase in the variable cost. Both the sales maximiser and the profit maximiser will raise their price and reduce their output. A shift in demand will result in an increase in output and sales revenue but the effects on price are not certain in Baumols model.

Price will depend on the shift of the demand and the cost conditions of the firm. As in the previous model the goal of the firm is sales revenue maximisation subject to a minimum profit constraint which is exogenously determined.

The new element in this model is the introduction of advertising as a major instrument policy variable of the firm. Baumol argues that in the real world non-price competition is the typical form of competition in oligopolistic markets. The model presented by Baumol treats explicitly advertising, but other forms mazimization non-price competition product change, service, quality, etc. This implies that advertising will always shift the demand curve of the firm to the right and the firm will sell a larger quantity and earn a larger revenue.

The price is assumed to remain constant. This, however, is a saless assumption which may be relaxed in a more general analysis. Another simplifying assumption is that production costs are independent of advertising. Baumol recognizes that this is an unrealistic assumption, since with advertising the physical volume of output increases and the firm might move to a cost structure where production cost is different increasing or decreasing.

But he claims that this assumption is simplifying and bauumol be relaxed without substantially altering the analysis. In fact Baumol relaxes this xales, as well as the assumption of constant price in the mathematical presentation of his model; see below.

From the above assumptions the following inferences saales be drawn. A firm in an oligopolistic market will prefer to increase its sales by advertising rather than by a cut in price. 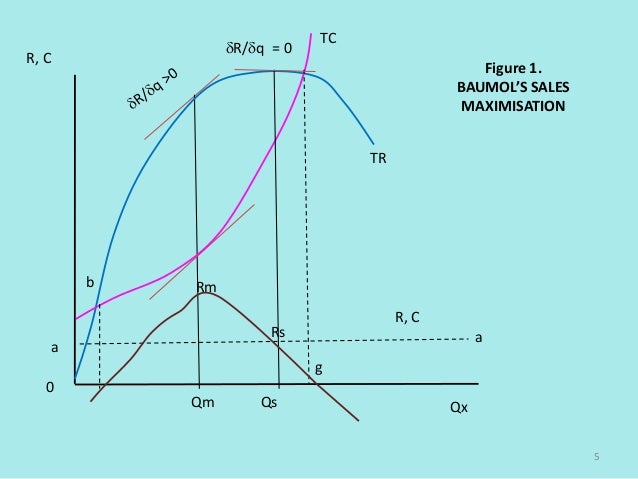 The interrelationship between output and advertising and in particular the assumed positive marginal revenue of advertising permits us to see clearly that an unconstrained sales maximisation is ordinarily not possible.

If price is such as to enable the firm to sell an output yielding profits above their minimum acceptable level, it will pay the firm to increase advertising and reach a higher level of sales revenue.

It should be stressed that the validity of this model rests on the crucial assumption that advertising always increases sales revenue. In particular Baumol does not examine explicitly the interrelationship between advertising, price, cost of production and level of output.

If total production costs are independent of advertising, that is, production costs remain constant after advertising takes place as Baumol assumes, this implies that total output X will remain constant after advertising has taken place; consequently an increase in sales revenue R, given X, can be attained only if P is raised. This case is in fact implied in figure However, this is inconsistent with what Baumol states elsewhere p. This statement implies clearly that advertising will not change the price.

Hence Baumol implies that the increase in revenue will be attained from an increase in the volume X. But then production costs will increase, since MC is always positive. They suggested that with advertising expenditures the TR curve will shift and in the new equilibrium revenue will be higher and advertising expenditure will be higher consistent with Baumol.

However, output may be lower and price higher in the new equilibrium, depending on the shift and the elasticity of the demand curve following advertising, as well as on the cost conditions of the firm.

In their model price, cost, output and advertising expenditure are all free to vary. We will mkdel present graphically their model as modified by M. Bushnell and by C.

Thus the total production cost function is a straight positively-sloping line through the origin. Thus a given level of advertising is presented by a straight line parallel to the X-axis.

Higher advertising levels are shown by parallel lines which are further away from the X-axis. Given the production cost function and the minimum profit constraint, a change in advertising A i will generate a family of total-cost curves which will be upward-sloping with their slope equal to the slope of production cost function. Such a family of total-cost curves is shown in figure The total-revenue curve shifts upwards as advertising is increased.

Thus, by changing advertising we may generate a family of total-revenue curves, each representing the relationship of total revenue to output at different levels of advertising expenditure. Such a family of total-revenue curves is shown in figure If we superimpose figures It is the dotted curve in figure The firm is in equilibrium when it reaches the highest point of this curve. Thus at point a.